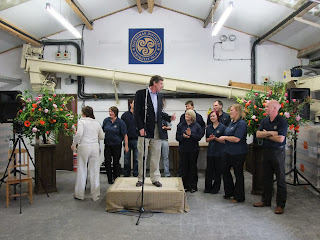 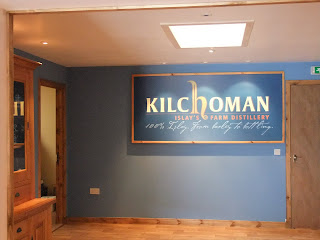 A couple of pics I took last week at the visit to Kilchoman. Anthony was quite emotional when speaking to the assembled populace about the success of the operation and the friendly and sterling efforts of his staff and directors in getting to the stage they are at.
I normally tell my students that it takes a distilling company 100 years to reach profitability, so that those who start a distillery now are doing it for the benefit of their grandchildren. The initial setup costs, followed by no cashflow for a minimum of 3 years and more likely 5, 10 or more years before the filthy lucre starts to flow in. Anthony has been very clever in selling bottled new make spirit and an imaginative - and wide - range of goods from the distillery shop. The bottles of new make are almost a demand brand in whisky retailers around the world.
Posted by John Lamond at 00:36 No comments:

Flew over to Islay yesterday for the launch of Kilchoman's first Whisky that has been completely produced on Islay: The barley was grown on the island; the barley was malted at the distillery; it was mashed, brewed and distilled at the distillery and, finally, it was matured and bottled at the distillery.
It is the first Whisky for over 100 years that has been wholly produced on Islay.
I joined a dozen others, journalists, PR, Charlie Maclean, Ian Buxton & myself, who jumped on a chartered Jestream and flew (no security checks, EXTREMELY civilised) for 25 minutes to then wee strip between Port Ellen and Bowmore, then a bus to Kilchoman distillery at Rockside farm on the west of the island.
AND THE SUN SHONE!!! It was an absolutely glorious day, blue skies, sunshine, no (or few) clouds and shirts sleeve warmth.
Richard Joynson from Loch Fyne Whiskies was there, as were importers from Belgium, Germany, France and Finland, along with the company's directors, shareholders and a number of people who have been instrumental in getting the distillery's produce out there. A local chef put on a fabulous spread which included sumptuous scallops flambeed in the distillery's whisky, fresh, local langoustines, a delightful crab tartlet and local venison.
Our flight back was eventful as we circled above Glasgow airport a couple of times and then headed out towards Cumbernauld above the under construction M80, finally wheeling back via Campsie Glen and Lennoxtown. Apparently, there was an incident involving armed police and the police helicopter at the west end of the main runway.
And the whisky?
Fresh and youthful with a great balance of peat and sweetness and flavours of citrus peel, sugar puffs and tobacco. My full tasting note will be on my website later today - I hope!
Posted by John Lamond at 04:45 No comments:

Whisky & A' That VIII

Robbie's Drams' whisky festival in Ayr took place last weekend. A great not-so-wee festival these days. 27 whisky companies taking part, 2 masterclasses: Duncan Macrae of Diageo showcasing the company's Talisker and Caol Ila and trying to persuade then maltheads that unaged malt is a good thing and James McTaggart from Isle of Arran talking about the trials and tribulations of managing a distillery in 2011, 600 people in Ayr Town Hall and a PA system which the hallkeeper didn't know how to operate.
Initially, I attempted to address the throng by shouting. My voice must have carried at least 10 feet from the stage before it was overwhelmed by the raucous hubbub. Graeme from Robbie's Drams was a saviour. He knew how to get the amps up.
It was a great day and I met many people whom I only see at this event every year. One of these days, I will stay over in Ayr drink instead of spitting out.
Robin Russell (the owner of Robbie's Drams) has announced a "Best in Show" whisky for the past three years and this year has had created a large silver quaich on a rosewood stand as the trophy for the winner selected by the votes of those attending. Previous winners have been Glenfarclas 21, Deanston 12 and Glenfarclas 21, but the 2011 winner of the Robbie's Drams Quaich Challenge was Tomintoul 21. This year, he has announced a second place - Hazelburn Sauternes Wood Finish and a third place - Glenfarclas 40.
The www.whiskytrailbars.com website has undergone a makeover - thanks to Drew Nicolson. He has taught me how to carry out html updates and ftp changes, but redesign is beyond me - at the moment.
My daughter participated in Hillfoots Music for Youth's annual year end concert last night in Tillicoultry and she learnt that she has passed her Grade 2 Trumpet exam. She is getting better, which reminds me, I must oil her trumpet's valves!
Posted by John Lamond at 11:34 No comments: