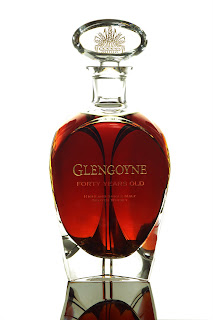 Following my post of yesterday, I have had a long intercourse with a couple of my students about whether or not a bottling such as Glengoyne 40 Years Old is at £3,750.00 per bottle value for money. One argued that the value of the liquid wasn't in question, but that most whisky drinkers would prefer to buy the whisky in an ordinary bottle, then they would be able to drink it. To buy a bottling in an expensive decanter with its wooden box and associated add ons just gives items which the drinker doesn't need - or want, he argued.
The other side was also put, by me, that the bottlers are making a statement in wrapping their superlative product in crystal and adding on extras, such as a booklet detailing what was happening in the world on the day that the whisky was distilled. And then cocooning it in a highly polished container.
The bottle which started all this is in the attached image.
Posted by John Lamond at 12:37 No comments:

Just back from Wigtown and the Wigtown Book Festival, http://www.wigtownbookfestival.com/index and, more specifically, Whisky & Words, a festival within a festival.
I was doing a tasting at midnight on 1st October and launching Bladnoch 8 years old, the oldest bottling produced by the distillery's current management and a pretty wonderful glassful, see my tasting notes.
The midnight tasting was titled "Flavours of Whisky" and is the content of a project I am currently working on. Being midnight, there was not a great turnout, but they were very receptive and some had not experienced such an event before.
As it was the first time I had delivered this presentation, I wasn't sure how it would work out, but it went very well indeed. Tying the various whiskies in with the characters of flavour which I find in them. The revelation for me was the marriage of Caol Ila 12 yo with freshly sliced oranges. It was magnificent.
The event was also attended by Gavin Smith, Hans & Becky Offringa (the Whisky Couple), Charlie Maclean, Neil Wilson, Ian Buxton, Richard Paterson, David Wishart, Helen Arthur and Tom Morton. We had a great time. It was the first time that the whisky festival side of it had run, although the book festival is now into its tenth year and it may be run again in 2011, setting a timetable as a biannual event. There was not a high attendance for some of the events, but the calibre of those who attended was high. Word will spread!
Tasted Dutch Whisky for the first time thanks to Hans, from Zuidam Distillers in Baarle Nassau - again see my tasting notes.
Posted by John Lamond at 08:55 No comments:

Just back from 18 days holiday. Visited the town of Erquy on the north coast of Brittany, what the call "le Cote d'Emeraude". Erquy is a very pleasant wee town with fabulous beaches - acres of sand! It has French, Belgian, Dutch, German and Swiss tourist - and damned few Brits! Good food and friendly locals. We holidayed in the Western Loire two years ago and noticed that the Euro prices had risen quite considerably since 2007. That added to the poor Sterling - Euro exchange rate made for an expensive holiday.
I was even in swimming a few times and the water wasn't too cold.
Visited Glann ar Mor distillery and hour and a half to the north west of Erquy. Here, Jean Donnay and his wife Martine operate the Celtique Whisky Compagnie, a Breton independent bottler, see http://www.celtic-whisky.com. Jean and Patrick, his helper (warehouseman/mashman/stillman/etc.) produce small amounts of spirit from distillery buildings which have the date 1668 carved into the lintel above the door. The first of Glann ar Mor's spirit became whisky at three years old earlier this year and was bottled at 3 years and 4 months old. My tasting note will follow.
Very cute little stills with a production of around a mere 50,000 bottles per annum, distillation is slow, wash still distillation takes 14 hours, spirit still distillation even slower.
Jean Donnay is a driven character, enthused, animated and focussed. A great ambassador for his own product, the stills were made for him in the Charente and are both direct fired - without rummagers.
Posted by John Lamond at 09:38 No comments:

Did a whisky dinner for the International Conference of the Centre for Research in Lifelong Learning at the Stirling Management Centre last night. Ben Nevis 10 with Cock a Leekie soup and Glenfarclas 15 with Raspberry Cranachan. One of the management’s staff was matching a wine with the main course. Even though I say so myself, both the whiskies were perfect matches to their respective dishes! The Glenfarclas received the most plaudits from the diners though.
School's out today. The weather looks good for the coming weeks, but, as always, we shall just have to wait and see.
Posted by John Lamond at 13:00 No comments: