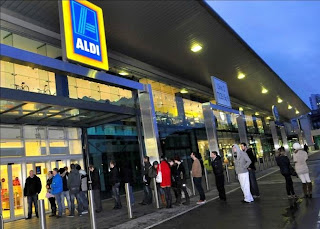 Scotland is being buffeted by rather strong breezes at the moment. A gust of 165 mph was recorded around 3.30p.m. on Cairngorm this afternoon and the worst is yet to come so they tell us. Many roads closed - either snow or trees down - Tay, Forth & Erskine bridges all closed to ALL traffic and Friarton & Skye bridges closed to high sided vehicles. The A66 is closed because of overturned vehicles, there are 2 overturned at the Rest And Be Thankful, Byres Road in Glasgow is closed, others such as the coast road south of Skelmorlie are flooded. 80mph winds blowing across the country with gusts higher than this. All Scotland's schools were closed by 12.30p.m.
On a more enjoyable note, Aldi released their 40yo Glen Marnoch Single Speyside Malt today. 3000 bottles between 450 branches. I visited Stirling before 10, no stock and one of my students, Alan Hall, said there were no bottles in Kilmarnock.
The bottle was on Aldi's shelves (when it was there) for £49.99 a bottle. I have heard that there are already bottles on ebay at £300.00. Just think of the extra profit Aldi could have made!
Posted by John Lamond at 08:28 No comments: 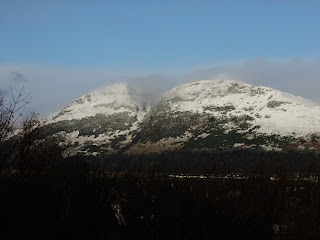 To quote Bud Neill:
Winter's came, the snow has fell,
Wee Josie's nose is froze as well.
Wee Josie's frozen nose is skintit,
Winter's diabolic intit?
the pic is of my local hill, Dumyat. At only 418 metres above sea level, it's not really a mountain, but the base of the hill is only about 5 metres elevation, so it is a good, solid, but quite easy walk to the top.
Our first snow of the winter today. Not a lot, but temperatures due to drop to -3 or -4 tonight with more snow tomorrow. Could make the roads rather difficult tomorrow.
My foot is still b____y sore. That nurse really is a sadist!
Posted by John Lamond at 11:53 No comments:

In the summer of 2005, I was pulling my then 6 year old daughter through the surf on a beach in the Western Loire to the south of the mouth of the Loire. The water here has fine sand in it, so the water isn't crystal clear and I stumbled across some rocks and ripped the sole of my foot open on rocks and oyster shells. My foot was bandaged up and I spent a few days hobbling around. Some months later, I noticed that where my foot had been cut, lumps of hard skin were manifesting. Went to the quack who diagnosed verrucas. I maintained that I felt that there were pieces of rock/shell embedded in my foot. For about 18 months, I treated the foot with a liquid and had cryotherapy (liquid nitrogen) treatment on the sole of my foot. It didn't clear up, so I thought that I was stuck with it. It wasn't causing pain, just a little discomfort which I put up with.
Until a couple of months ago when the foot started to be painful. Went back to the quack who arranged for an x ray to see if there were actually any foreign bodies in my foot because, as he said, my foot shouldn't have been like this for 6 years. He also suggested that I recommence the cryotherapy.
At 5.00pm last night, I saw a sadistic nurse who treated the sole of my foot with the liquid nitrogen - as it has NEVER been treated before! I now cannot walk, I was in sincere pain driving home from the surgery last night, the damaged area is on the ball of my left foot, where the clutch pedal sits.
The good news is that the Scotch Whisky industry has reported record export figures - again! Export sales rose by 23% in the 9 months to 30th September, effectively achieving 2010's exports in the first 9 months of 2011! Brazil, with its 7% annual growth in GDP is the world's fastest growing whisky drinking nation: sales increased by 50% in the 9 months!
See http://www.heraldscotland.com/business/corporate-sme/exports-of-scotch-whisky-surge-to-hit-record-levels-1.1137758?3378
Posted by John Lamond at 01:07 No comments: